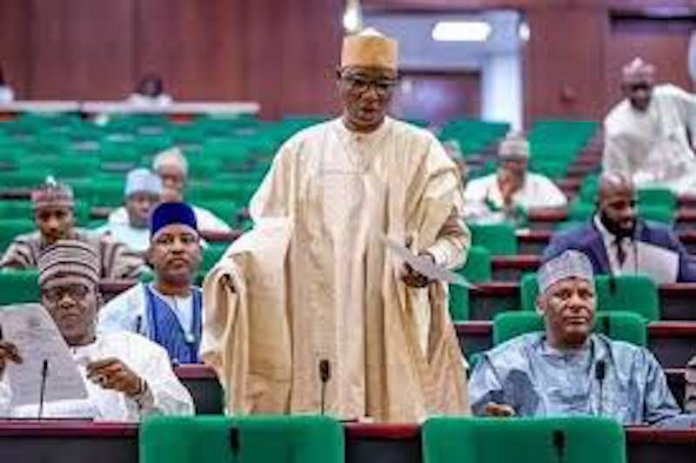 Chairman, House of Representatives Committee on Water Resources, Hon. Sada Soli, has played down the opposition to the reintroduced Water Resources Bill, saying it won’t change the determination of the legislature to pass it.

He also criticised opponents of the bill, including Benue State Governor, Dr. Samuel Ortom, and Nobel laureate, Prof. Wole Soyinka, whom he accused of speaking out of ignorance because they did not read the draft of the legislation before making comments.

The lawmaker, who represents Jibia/Kaita Federal Constituency in Katsina State, vowed that the bill, which was earlier passed by the eighth House, won’t be stepped down.

The legislation titled: ‘A Bill for An Act to Establish a Regulatory Framework for the Water Resources Sector in Nigeria, Provide for the Equitable and Sustainable Redevelopment, Management, Use and Conservation of Nigeria’s Surface Water and Groundwater Resources and for Related Matter,’ when passed into law, would bring all water sources under the control of the federal government. This has led to criticisms as various stakeholders have said the bill negates the right of Nigerians to natural resources and undermines the country’s federalism.

Prominent leaders from Southern Nigeria and the Middle Belt, including Ortom and Soyinka, have kicked against the bill.
Also, socio-political organisations, including PANDEF, Afenifere and Ohanaeze Ndigbo, have condemned the bill, saying it’s an attempt by the federal government to secure the lands around the rivers in southern Nigeria to resettle the herdsmen after the failed Rural Grazing Area (RUGA) initiative.

Ortom had said the provisions of the bill were at variance with the Land Use Act, and that the bill was a “disguised land-grabbing legislation designed to grant pastoralists unhindered access to river basins, adjacent marine and coastal environments across the country.”

With the bill providing for the federal government to annex the banks of rivers that connect up to two states, concerns have been raised that the purpose of the promoters of the bill is to provide land for the herdsmen.
The fact that the key champions of the bill are legislators from the far north has fuelled this suspicion.
The bill’s opponents said it was curious that when Nigerians are agitating for the federal government to cede more powers to states, it’s allegedly embarking on land-grabbing.

A former senator, who spoke to THISDAY on condition of anonymity, recalled the role played by the Minister of Niger Delta Affairs, Senator Godswill Akpabio, who as the minority leader of the eighth Assembly, persuaded his colleagues to reconsider passing the bill.

“We were shocked when Akpabio appeared for ministerial screening, the distinguished Senate president told him that ‘now that you are on this side, you should go and liaise with the Minister of Water Resources to ensure that the Water Resources Bill is passed. That bill must be passed.’ When the Minister of Water Resources who was reappointed, also appeared before the Senate for the same screening, the minister said that his greatest regret in his first tenure was the non-passage of the bill. What did they see in this bill? What is special about this bill? Why the desperation to annex the waters and the land around the waters? There is a hidden agenda and sinister motive,” he stated.

A former member of the House also told THISDAY that the allegation of sinister motive on the part of the promoters of the bill should not be discountenanced.
He said: “As someone had pointed out, they want to confiscate the waterways and the surroundings and allocate to the herdsmen and claim that the government had also supported poultry farmers, maize farmers, cassava and fish farmers.

“The federal government has seized the oil resources and they want to also seize the water resources, even when the clamour for resource control is becoming increasingly popular. We understand that one of their major targets is the bank of River Benue. The suspicion is that they want to relocate herdsmen to the bank of the River Benue and other rivers in the south in the name of supporting livestock farming. They want to move herdsmen southwards because of the drying up of Lake Chad. They are using the revenue to be generated by the federal government as a disguise to hoodwink us.”

But Soli told THISDAY that the bill is in the best interest of Nigerians and that Ortom, Soyinka and every other person having misconceptions about it.
Soli said there was no provision in the bill that empowers the federal government to usurp the position of the states or local governments.

He added that the bill has nothing to do with RUGA policy.
According to him, the bill couldn’t be stepped down because the House has passed it already, adding that those who feel that there’s a motive to the bill should bring out the issues to the parliament and then amendment could be done.

“The bill can’t be stepped down because the House has passed it already; the lawmakers that are saying that they will step it down or that it was introduced illegally is because, may be, they were not there on the floor of the House when the members were given the opportunity to look at the bill not once or twice. Remember it was passed by the eighth Assembly.

”If people have something against the legislation, let them point it out and then it could be amended to conform to the wishes of Nigerians.
“If you didn’t understand something or have an idea about something, the easiest thing is that you will misconceive the whole idea.

“On the claims about the bill being RUGA in disguise, people should not display their parochial mindset or because they have a deep-seated hatred for this government policy and then they will transfer it to whatever the government places before the parliament. What has water resources got to do with RUGA? RUGA policy is a policy of the government, Water Resources Act stands alone. What is the connection?

“In the whole entire volume of that law that was passed, there was no mention of RUGA or grazing land or Fulani herdsmen. These are deep-seated hatred of government policy. This is a law that has been existing in the House and Nigeria for too long. The bill has been there since 1985. It is a combination of about four Acts; they were repealed and consolidated in one so that the water sector can have one kind of law. It’s easier to implement and determine how things should operate.

”Water Resources Bill is important because we’ve had it before. There was Water Resources Act of 1985; there’s River Basin Development Authorities Act; there’s Water Resources Institute Act, Hydrological Integrated Agency Act and these were laws that were brought together, improved to meet up with the development in the water sector and best practices around the world.

”If people have something against the legislation, let them point it out, and then it could be amended to conform to the wishes of Nigerians. I have been asking people to tell me the section of that bill that they have a problem with. Not one could tell me. They are just speculating, saying RUGA this and that but there’s nothing talking about Rural Grazing Area in that bill. That’s a complete display of ignorance about the bill.

“But people have their suspicion because they don’t like what this government brings on board, simple. If it is something of concern, of course, people will sit down and look at it. It’s because they are lazy; they couldn’t read it to see how the principles will work and that’s why they are speculating all these shenanigans and confusing the general public.

Soli urged critics of the bill to lobby the legislature for the amendment of the bill.
“Let the people approach the parliament and then we do the needful. If it goes to the Senate and they decide to hold public hearings then they should, but the House has done that. There was a technical committee where all the ministries of water resources came to the National Assembly and they were part of the public hearing and all representations were brought even in the borehole drillers. The government of Benue State was also at the public hearing.

”From what I heard, the government of Benue is the only state that’s against this bill because they have a fixated mind about the RUGA thing. All the stakeholders were there before this bill was considered in 2017; so, what’s the problem? If they say the bill is against certain interests, what is the interest? Let them point it out.

“The Governor of Benue State Samuel Ortom, Wole Soyinka and others talking about this bill didn’t read it. I’m looking for an opportunity to meet these elder statesmen to educate them. They are being informed about something that does not exist. Maybe the backlash is political; maybe they feel it’s an achievement of this current government and they don’t want it. This is just an improvement of existing laws, nothing more or less,” he added.