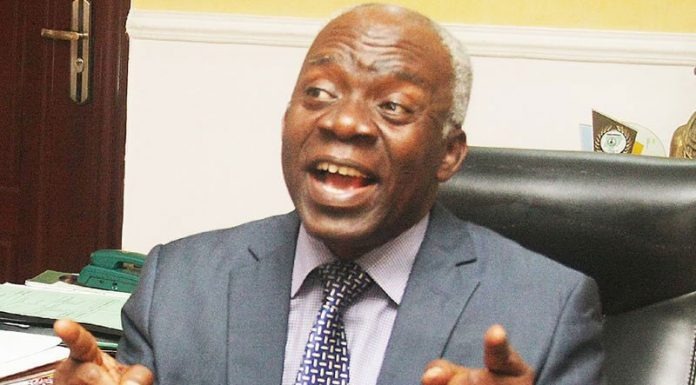 Femi Falana, a senior advocate of Nigeria (SAN), has asked the judicial panel investigating Ibrahim Magu, suspended chairman of the Economic and Financial Crimes Commission (EFCC), not to act on “misleading evidence”.

The panel, headed by Ayo Salami, retired president of the appeal court, is investigating Magu over allegations of corruption and abuse of office.

In a letter dated September 4, 2020, Falana said one Gnahouse Sonrou Nazaire, a Benin Republic national who is standing trial at the Lagos state high court, petitioned the panel that he was accused wrongly by the EFCC under Magu.

In the two charges pending at the Lagos state high court, Nazaire was accused of having defrauded Rachidatou Abdou, his erstwhile girlfriend and business partner who is a Nigerian citizen.

Falana, writing on behalf of Abdou, his client, requested that the panel refrain from recommending the termination of the charges against Nazaire at the Lagos court.

The senior lawyer said Naziare and others have been frustrating the court proceedings, and are now using the panel to have the criminal cases against them terminated.

“Our client who is the complainant in both criminal cases has informed us that the defendants recently submitted a petition to the Honourable Judicial Commission of Inquiry headed by the Honourable Justice Issa Ayo Salami PCA (rtd) where they claimed, albeit falsely, that the suspended Chairman of the Economic and Financial Crimes Commission, Mr. Ibrahim Magu abused his office by charging them with forgery and stealing in the Lagos State High Court on the basis of a petition written on her behalf by our law firm,” the letter read.

“We have since confirmed that the Honourable Judicial Commission entertained the petition, reviewed the two criminal cases pending in the Lagos State High Court and took evidence from the 2nd defendant who has been dismissed from the company on grounds of fraud. The tainted evidence of the defendants was said to have been corroborated by his lawyer who alleged that the Economic and Financial Crimes Commission is currently prosecuting Mr. Ricky Tarfa SAN for defending the defendants in the criminal cases.

“Contrary to the spurious evidence of the defendants before the Honourable Judicial Commission our client’s petition was submitted to the EFCC under the chairmanship of Mr. Ibrahim Lamorde. The EFCC painstakingly investigated the complaint, indicted the defendants and charged them with forgery and uttering of documents at the Lagos State High Court on July 20, 2015.  The Charge No was LD/1709C/2015 (FRN v Gnahoue Sourou Nazaire &2 Ors) was later amended with the leave of the learned trial judge. However, following the commencement of the criminal proceedings in the Lagos State High Court the defendants filed a fundamental right application (Suit No FHC/L/CS/715/2015) at the Federal High Court seeking to restrain the Attorney-General of the Federation, Inspector General of Police and EFCC from arresting, detaining and persecuting them on the basis of our client’s complaint.

“It is on record that the criminal case instituted by the EFCC against the defendants at the Lagos State High Court in July 2015 and the fundamental rights cases filed by the defendants at the Federal High Court were inherited by Mr. Ibrahim Magu in November 2015 upon his appointment as the Acting Chairman of the EFCC. Therefore, the defendants LIED ON OATH and deliberately set out to pervert the course of justice when they claimed before the Honourable Judicial Commission that our client’s petition was submitted to the EFCC under the leadership of Mr. Ibrahim Magu.”