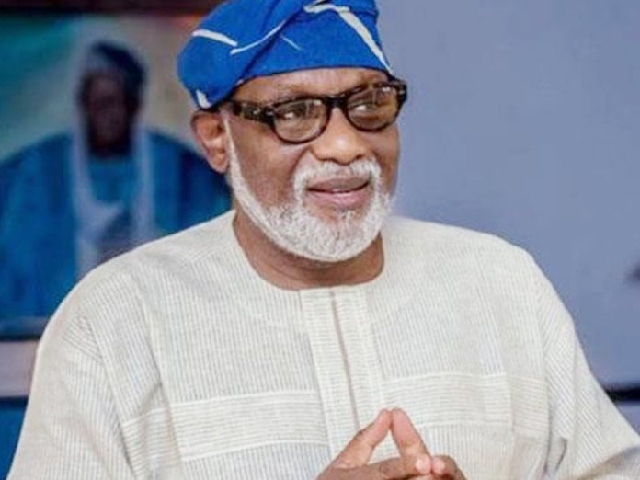 Ondo State Governor and the candidate of the All Progressives Congress (APC) in the October 10 governorship election in the state, Mr. Oluwarotimi Akeredolu, yesterday expressed optimism that he would retain his position.

“We have done a lot of work that will speak for us, “Akeredolu, told ARISE NEWS, the broadcast arm of THISDAY Newspapers, saying his performance in office would ensure his victory at the election.

He also slammed his predecessor, Dr. Olusegun Mimiko, whom he described as a spent force and a betrayer.
The APC candidate denied ever being an ally of Mimiko, adding that he would retain his seat without his support.
Mimiko is backing Akeredolu’s estranged deputy, Chief Agboola Ajayi, who is running on the platform of Zenith Labour Party (ZLP).

“Mimiko is not my ally. I ran against him in 2012. I ran against Jegede in 2015 with Mimiko supporting him. How can you call Mimiko my ally?
“The only thing is that I have treated him fairly. No other governor has treated his predecessors as fairly as I have treated Mimiko. Mimiko has his own traits,” the governor stated.
Akeredolu also condemned the relationship between Ajayi and Mimiko, stating that they are united by the same bad behaviour.

He said: “If Agboola had done what he did and found solace and succour in Mimiko, that is unfortunate. It is because they shared the same traits. People who are prone to betraying others must come together. They have an identical feather. They want to work together. So why are we worrying ourselves about them?

“Mimiko is not a political force anywhere. He left office and wanted to go to the Senate. He did not even win his local government out of six local governments. So, what force is he?
“He is a spent force. He is dead politically and probably he needed some resurrection and some support. If Agboola has some money to waste, they can support him. Mimiko is nobody in the politics of Ondo State today and Agboola cannot resuscitate him.

“Let them do whatever they can do but for them to say I am nervous about forces, they say they are Third Force, third force from what? They don’t exist. They exist in your news medium only.

“I can assure you. We are prepared. This is APC. When we are not in government, Mimiko with Jegede, we defeated them. Why should we be afraid? We won convincingly. We defeated them in 14 local governments out of 18.

“Let me assure the people that are watching us today that we are going to win the entire 18 local governments. We are not boasting. We have worked and people have seen our work and our work will speak for us. We are not a garden of betrayals.

“Mimiko can continue with what he is doing. He worked with Adefarati, he betrayed him; he worked with Agagu, he betrayed him. Asiwaju Bola Ahmed Tinubu, we all supported him to become the governor, did he not betray us? And you call him my ally. We have never been in the same political camp.

“He is not my ally. I just brought Agboola from PDP to come and work with us. If he feels he wants to go back home, he has his record. Tell me any person, who had been in three political parties in one month. From APC to PDP and to one party called Z Labour Party. Is that a human being?

“You can see that he is an inconsistent person. Three political parties in one month.”
However, Akeredolu said the Peoples Democratic Party (PDP) candidate, Mr. Eyitayo Jegede, SAN, is qualified to be the governor of the state, describing him as a responsible and reasonable person.

But he said the time was not right for Jegede to contest being from Ondo Central where he (Mimiko) came from.
The governor said he (Akeredolu) ran against the tide in 2012 when he contested against Mimiko because the people had made up their minds that the central must have its second term.

Similarly, Akeredolu said the people had also made up their minds that he, from Ondo North should have another four years so that it could go to the south.
“So, Jegede is eminently qualified, he is a lawyer of repute, somebody I respect, a Senior Advocate of Nigeria like me. But for Agboola Ajayi, Ondo State is not for a neophyte,” he said.

Asked whether he is expecting a stiffer contest with Jegede, the governor said: ” He is a worthy adversary. I don’t see anything wrong with him. He is somebody I have a lot of respect for. He is making a futile effort because he will soon realise that the timing is not right for him now.

“He cannot on his own to disrupt the written agreement of who becomes the governor. We have done a lot of work that will speak for us.”

On what he would do differently when he is re-elected, he said: “We have a lot we are doing; we need to go deep into finding solutions to so many other problems we have in this state. I spoke about the infrastructural deficit. We are not where we should be yet as a lot of work is still there to be done, a lot of roads and industries need to be constructed. We have six industries working here. Is that all we need to have in Ondo State? No. We need to build more industries and encourage more investors to come into the state.

“Those are the challenges we are still going to face and I have in place two other industrial hubs that are coming up. I believe that people should allow us to see this through. We have had situations where governors come in and they don’t believe that government is a continuum.

“They disrupt everything that their predecessor has done. I didn’t do it in my own time and I don’t believe that it is right. I am one of those that believe that if you allow for continuity, there will be consolidation. In the next four years, I believe it is not the time for us to rest, but for us to continue with the work we are set to do.”

The governor said he has been working so that the state could have a deep-sea port which would be a great achievement for any government, adding that he has ensured exploration and mining of bitumen, so that Nigeria would not have to import it.
“I want to see it through. The numerous projects, which my administration has been able to achieve over the years, is a landmark achievement,” he added.

Victor OkehEditor
Sorry! The Author has not filled his profile.