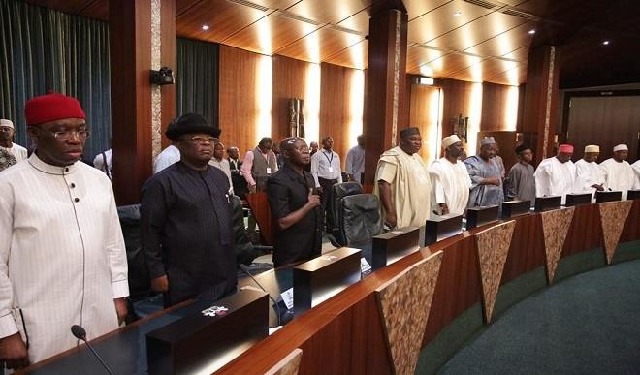 The Nigeria Governors’ Forum (NGF) has expressed displeasure over what it described as false assertion that governors are refusing to pay the N30,000 national minimum wage as demanded by workers.

Also, the organised labour has vowed that it will go ahead with its planned protest against the delay in the transmission of minimum wage bill to the National Assembly by President Muhammadu Buhari.

In a statement issued Monday by the NGF Head, Media and Public Affairs, Abdulrazaque Bello-Barkindo, the governors said that the NLC was trying to destroy the conviviality that is already building-up between workers and their governors in the states.
It said that the statement credited to the NLC General Secretary, Peter Essom, that the governors did not want increase in minimum wage was not only mischievous, but misleading and in bad faith.

The statement said: “State governors are making concerted efforts to improve education, health and infrastructure and for this, would not therefore dedicate their states’ entire resources to workers’ salaries alone, knowing that workers constitute less than 5% of the nation’s population”.

The NGF said the governors collectively resolved that no state would devote more than 50% of its revenue to salaries.
“To therefore insist that states must oblige the NLC its demands, regardless of the economic gloom that stares the nation in the face is most unpatriotic and a deliberate attempt to hold the nation, especially the president, to ransom, this being an election year.

“At this point it is important to remind the NLC that most governors exhibited a high sense of responsibility and concern for the plight of workers by ensuring that most of them were paid their December salaries ahead of time. Some even received several months’ salary arrears that was owed them, and they are happy with their governors,” it said.

According to the NGF, governors have “collectively made it abundantly clear that they would have been happy to pay workers the N30,000 but times are hard and because of financial constraints and other limitations, many states cannot afford it, for now”.

It said that the governors had offered workers a token increment of the sum of N22,500 from the current N18,000 after the submission of the report of the Tripartite Committee set up by the President and headed by a retired Head of Service Ms. Amma Pepple on October 6th.

“The N22.500 was arrived at, after extensive deliberations among all 36 governors, outlining their financial capacities and liquidity, considering the economic situation of the country and the states’ other obligations to majority of the people of their various domains.

“Governors also emphasised that N22,500 is a “baseline threshold”, meaning that any governor who can pay more than N22.500 is therefore free to go ahead and do so.
NGF said that the governors had met with President Muhammadu Buhari twice all in their effort to resolve the issue of minimum wage.

“To put the records straight, governors are not under any obligation, by law, to show their books to the NLC. But they have, in their pursuit of the understanding of the union, done so, not once, but several times over, with a view to letting NLC know that what they are asking for is neither realistic nor sustainable.
“Yet, NLC remains adamant that its will must be done, or the heavens will fall,” it said.

Meanwhile, the NLC has said that the organised labour will still go ahead with planned protest against delay in the transmission of minimum wage bill to the National Assembly by President Buhari.

The General Secretary of NLC, Peter Essom, told THISDAY Monday on telephone that if the president fails to submit the bill by December 31 as demanded by labour, they will have no option than to proceed with the protest scheduled for January 8.

Victor OkehEditor
Sorry! The Author has not filled his profile.
Related tags : NLCTUC