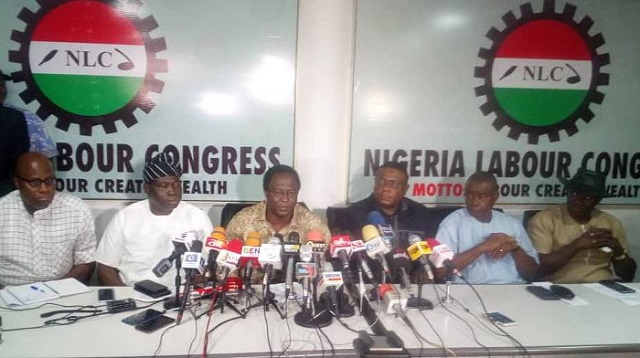 The planned nationwide strike by the labour unions over a new minimum wage has been shelved for now. The strike was scheduled to start on Tuesday.

Labour leaders, government representatives and organised private sector spent many hours on Monday to reach a consensus on a minimum wage.

But it was in vain as the Tripartite committee decided to convey the resolution of the meeting to President Muhammadu Buhari, for onward transmission to the National Assembly.

The report will be  submitted to  President Buhari on Tuesday  by 4:15 pm.

Government wants to pay N24,000 as minimum wage, but the labour leaders are insisting on N30,000.

President Muhammadu Buhari on Monday intervened in the impasse  by appealing  to the labour unions, especially the Nigeria Labour Congress (NLC) to consider  the rot  his administration inherited from the previous governments.

The President explained that the present government was doing more with the ‘fewer resources’ at its disposal in putting the nation’s economy right.

Victor OkehEditor
Sorry! The Author has not filled his profile.
Related tags : NLCTUC