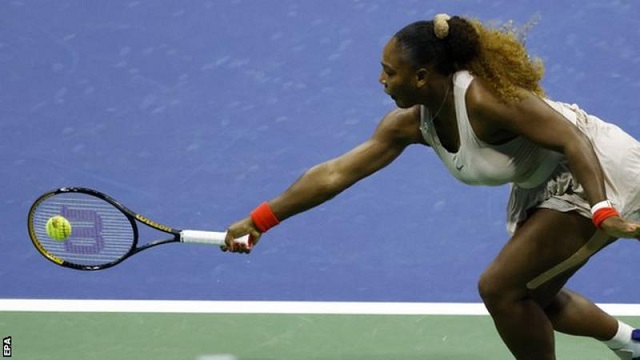 Six-time champion Serena Williams progressed to the third round of the US Open with a 6-2 6-4 win over Russian Margarita Gasparyan in New York.

The American, 38, cruised through the opening set but found the world number 117 a tougher proposition in the second under the Arthur Ashe Stadium roof.

The pair broke each other twice before Williams secured a crucial third break in the 10th game to seal victory.

“She’s such a good player – she plays so smooth,” Williams said of Stephens. “She looks like she’s not taking on energy, then ‘blam’ – there’s five winners. It’s not easy.”

A handful of the 11 unforced errors Gasparyan made in the first set came in her opening service game when she was broken despite having led 40-0.

Williams then broke again with an excellent overhead to go 5-1 up; although she lost her serve to love in the next, the American bounced back in the following game to break for a third time and seal the set in 35 minutes.

Gasparyan improved markedly in the second set at Flushing Meadows despite going a break down to fall 3-1 behind. The 26-year-old, who recovered from three knee operations earlier in her career, twice broke back and had Williams on the ropes again at 4-4, before the 23-time Grand Slam singles champion eventually held her serve.

The American, who last won the US Open in 2014, broke Gasparyan in the next game to avoid potentially being dragged into a third set.

Williams, used to a large support cheering her inside the Arthur Ashe Stadium, said: “I love the crowd here, but this is something cool. I play in the modern era. There’s something more calming about it.”

This was Williams’ 103rd singles win at Flushing Meadows, having passed Chris Evert’s Open era record of 101 earlier in the week. She is seeking to equal Margaret Court’s record of 24 Grand Slam singles title.