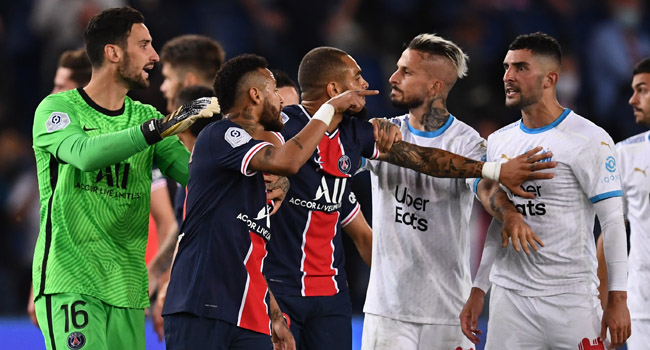 Marseille secured a first win over Paris Saint-Germain in 21 matches as the Ligue 1 champions lost 1-0 on Sunday and had Neymar sent off on his return from serving a Covid-19 quarantine.

Florian Thauvin scored the only goal on 31 minutes at the Parc des Princes as Marseille earned a first victory over their bitter rivals since November 2011 in a game which ended with five red cards in injury time.

PSG, who lost the Champions League final to Bayern Munich last month, have now lost their opening two games of a season without scoring for the first time since 1978/79 and the task for Thomas Tuchel’s coronavirus-afflicted side does not get any easier this month.

A frenzied schedule awaits, starting with the visit of Metz in midweek and a trip to Nice next Sunday, and Neymar now faces a suspension for a slap on Marseille defender Alvaro Gonzalez in an injury-time scuffle that resulted in five red cards.

The Brazilian appeared to accuse his opponent of racism as he followed Layvin Kurzawa and Leandro Paredes down the tunnel after he was sent off following a VAR review.

Marseille are attempting to close the gap on PSG after coming a distant second last season and find themselves with an early six-point advantage over a club that has won the title seven of the past eight years.

After fielding a depleted line-up at Lens on Thursday, Tuchel was able to recall Neymar and Angel Di Maria for a match played in front of around 4,000 supporters in Paris.

However, Kylian Mbappe remained absent after testing positive for Covid-19 on France duty at the start of the week with Mauro Icardi and Marquinhos also still missing.

PSG handed a debut to Italy international Alessandro Florenzi following his arrival on a season-long loan from Roma while Sergio Rico started in goal after rejoining on a long-term deal.

Marseille ‘keeper Steve Mandanda produced a magnificent reflex to keep out an effort from Marco Verratti just a minute in as tempers bubbled over frequently in the capital.

Thauvin, who shone in Marseille’s opening 3-2 win at Brest before the international break, made the breakthrough when he turned in a Dimitri Payet free-kick from point-blank range.

Di Maria found the net for PSG just past the hour but had strayed clearly behind the last defender, and Marseille’s celebrations were cut short in similar fashion moments later when a Benedetto goal was ruled offside.

The Argentine rifled in a rebound after Rico parried from Thauvin, who was controversially adjudged to be in an offside position much to the frustration of Marseille.

PSG’s last goal came in the 3-0 win over RB Leipzig in the Champions League semi-final on August 18, and Neymar poked wide from a Pablo Sarabia cross before the contest turned ugly at the finish.