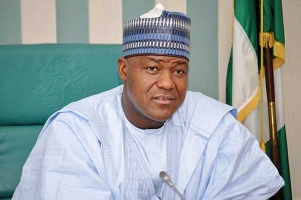 The Speaker of the House of Representatives, Hon. Yakubu Dogara, yesterday disclosed that the N30,000 minimum wage being canvassed by workers can barely feed a small family unit.

But the Chairman of the Nigeria Governors’ Forum (NGF) and Governor of Zamfara State, Abdulaziz Yari, reinterated that reviewing the minimum wage would depend on revenue sharing formula.

The governor said that when the wage was to be raised to N18,000, the governors raised the need to review the revenue sharing formula, which he said the workers were aware of.

Dogara, who spoke at the National Assembly during a public hearing on the New Minimum Wage organised by the House Ad-hoc Committee on New Minimum Wage, 2019, added that it is only when workers are dignified with wages that can provide them minimum comfort that their productivity level will increase.

He noted that the two focal points that must be given priority by government are poverty and corruption because while the former, caused mainly by underemployment and unemployment, is a threat to democracy, the latter fundamentally undermines democratic institutions and values.

Dogara, therefore, proposed for a more reasonable living wage that will not only provide for basic needs of the workers but also enable them to make provisions for themselves that will lift them out of poverty and lead to a reduction in corruption.

He explained that poverty as a threat to democracy is evident in vote buying and in the use of money to compromise electoral and security officials during elections, thereby subverting the will of the people on account of the sense of despondency and powerlessness that their lack breeds, and therefore, making them ever ready tools in the hands of tyrants and demagogues, who in the course of history, have always found it easy to mobilise for the purposes of subverting democratic Institutions.

The speaker stated, “While we are not oblivious of the current economic downturn and the dwindling revenue of government, we cannot also be blind to the fact that all economic indices indicate that even the 30,000 Naira Minimum Wage that Labour is asking for is not enough to sustain a small family unit. The nation may not have enough to satisfy the minimum demands of the Nigerian worker, but as a nation, we need to set our economic priorities right and ensure that we dignify our workers by making allowance for their minimum comfort. I know of no alternative if we hope to up the productivity level of our workforce.

“When we do not pay living wage, we cannot tame corruption. When workers’ take home is not enough to take them home, the temptation for them to cut corners in order to get home will always be there.

Workers keep and process our national wealth and the only way to insulate them from the temptation to want to help themselves to it, is to ensure they are well remunerated.

He proposed five amendments to the bill presented by the federal government.

Maintaining that labour and government agreed to a N30,000 minimum wage for workers, Wabba, who spoke on behalf of the Trade Union Congress (TUC) and other labour bodies, said Nigerian workers want some sections of the new minimum wage bill amended.

“We have four amendments that we are proposing here. Amendment one is about the figure. In the current bill, Item 1(a) provides for a minimum wage of N27,000; we want to say and plead that the figure should be made to be N30,000,” Wabba said.

“The next Section 2(b) where it talked about the duration. In this report, which we mutually agreed to, we agreed on a four-year circle. It is there in the bill. As an addendum, labour also want to propose an amendment because this is a public gathering; to say, yes, it should be four years circle or if there is a major economic issue that will reduce or affect the value of the current minimum wage. So, whichever comes first will trigger the process of looking at the minimum wage.

“The other one is the issue of the threshold. We also have issue, which is not in contention in this report that the threshold should be removed because we said every worker must be able to earn the minimum wage. To say that those employing less than 25 workers should not be the case.

“Lastly, when you look at item 4(b) — that is the body that will be charged with the responsibility of making the next review; I want to emphatically say also that what is being proposed here is different from what was recommended by the tripartite, where we said any future review will be done by a tripartite committee — as we have done because that was what was done in 2011,” the labour leader stated.

He said the tripartite committee should always come to the negotiation table on equal number.

He also told the lawmakers to “Amend Section 5(a) where it was also recommended that the penalty should not exceed N5,000. We thought that this is a very serious matter and therefore the penalty of N5,000 is too minimal and therefore we want to recommend and submit that 10(b) (viii) to read: a fine not exceeding N75,000.”

Review will Depend on Revenue Sharing Formula, Says Yari

However, the Chairman of NGF, Yari, said reviewing the minimum wage would depend on revenue sharing formula.

He added that when the matter of the minimum wage came before the governors, they made so many efforts as governors and reviewed their current problem, saying that the problem is simple about revenue sharing formula.

The governor said when the wage was to be raised to N18,000, the governors raised the need for a review of the revenue sharing formula, which he said the workers were aware of.

He said while the parties in the negotiation agreed on N18,000, it was also agreed the revenue sharing formula was overdue for a review, adding that has not been done.

In his contribution to the debate, the Minister of Labour and Employment, Dr. Chris Ngige, however argued that the tripartite committee agreed to review the minimum wage that the government can sustain, which he said was N27,000.

Ngige argued, “The federal government had earlier offered N24,000 while state governments offered N22,000. However, after several consultations and with the meeting held by the National Council of States approved minimum wage for all workers of the federation at N27,000 and not N30,000.

“I would like to clear some misunderstanding and misconceptions about this whole minimum wage thing because there is no need for semantics. Therefore, what has been proposed as national minimum wage does not preclude those who are willing to pay above the threshold.

On her part, the Minister of Finance, Hajia Zainab Ahmed wants workers to be more pragmatic in their demand for increment in the national minimum wage on the basis of government’s ability to pay.

Speaking at the public hearing, she said: “You will recall that the 2018 budget that was passed by the National Assembly had the total expenditure size of N9.12 trillion. The approved revenue for that budget was N7.17 trillion.

‘’The total cost of the salaries paid during the months of January to December 2018 was a total of N2.618 trillion; this represents 72.66 per cent of the actual revenue that was generated between January and December to the tune of N3,603 trillion.”