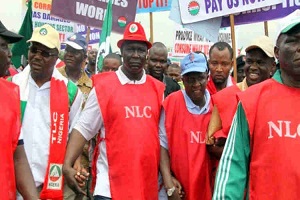 Organised Labour yesterday held sensitisation rallies in some city centres. The rallies were organised to create awareness for the nationwide strike slated for November 6.

The job boycott is to compel governments and employers to pay 30,000 as minimum wage to the least paid workers.

According to the labour unions – Nigeria Labour Congress (NLC), Trade Union Congress (TUC) and United Labour Congress (ULC), the N30, 000 is a compromised figure agreed to by members of the tripartite wage review committee.

The labour’s position contradicts the positions of the federal and state governments. The Federal Government is proposing N24, 000. The states shifted their position last night. They agreed to pay N22, 500. The Nigerian Governors’ Forum (NGF), which initially offered to pay N20, 000, argues that its members have been struggling to meet the N18, 000 minimum monthly salaries to workers in their domains.

But the Nigerian Association of Chambers of Commerce, Mines and Agriculture (NACCIMA) yesterday washed its hands off the N30, 000 minimum wage claim by the labour unions.

It disowned the Nigeria Employers Consultative Association (NECA) and Organised Labour on the issue of the new minimum wage, saying it never agreed to any figure.

In Lagos, the workers’ possession took off from Ojuelegba through Ikorodu Road en route Ojota to register their grievances against the reluctance of the Federal Government to implement the new minimum wage.

NLC Deputy President Amaechi Asugwuni urged Nigerians to stock food items in the house ahead of the indefinite nationwide strike.

According to him, yesterday’s rally, tagged: “Mourning Day”, was part of the struggle to defend the Nigerian worker and to sensitise Nigerians to brace for the strike.

He said: “Because, once we commence the strike, there is no going back except the government agrees to our terms and conditions. The minimum wage is a legitimate right for Nigerian workers.”

The ULC President, Joe Ajaero, reiterated that N30, 000 is not negotiable.

He said: “We are on the road to tell the government that enough is enough. The November 6 will be the mother of all strikes in Nigeria. Posterity will judge us if we fail to rise up to defend Nigerian workers.

“There is no good healthcare and electricity tariff is far more than 18, 000 minimum wage and the tariff continue to increase.”

At the Freedom Park, named after fiery human rights’ advocate, the late Gani Fawehimi, where the workers drew a curtain on their rally, the unions sent a powerful message to the Labour & Employment Minister, Dr. Chris Ngige and President Muhammadu Buhari.

They threatened to disrupt the general elections next year if the Federal Government failed to implement the new minimum wage.

In Asaba, Delta State, workers took to major streets within the metropolis to protest alleged reneging on the tripartite agreement between their unions and the Federal Government on the new minimum wage.

Carrying placards with various inscriptions as “Pay us N30, 000 or no elections”; “Minimum wage will reduce poverty”; “Increase our wages”; the workers, led by the local chairman of the NLC, Jonathan Jemirieyigbe,  converged on the Delta State Government House, demanding audience with Governor Ifeanyi Okowa.

Jemirieyigbe told reporters that the rally was to create awareness and put the records straight, following attempts by the government to hoodwink Nigerians on the new minimum wage.

He condemned the comments credited to the Dr. Ngige that the Federal Government has not reached agreement with organised labour.

The NLC chair urged Deltans to take seriously the threat by the unions to shut down the nation by stockpiling on foodstuffs so as not to be caught unawares.

His words: “This is an information rally. It is to create awareness and also to set the records straight. The way and manner the Federal Government representative on the tripartite committee is trying to tell Nigerians that an amount has not been reached.

“This is an erroneous statement which the rally is expected to correct. It is to sensitise the public so that Deltans are aware of what is coming up. On the 6th of November, the Federal Government’s failure to agree and implement the agreement by the tripartite committee will be met with strict resistance by labour.”

ULC Vice President Ogbaloi Kelly described the minimum wage as an act of parliament which must be respected by the government.

He said: “We are not going back on N30, 000 minimum wage. If they test the will of organised labour, this country will be shut down and labour will not be held responsible.”

Okowa’s Chief of Staff Tam Brisibe, who attended to the workers, lauded them for their peaceful conduct, assuring that the state government will abide by any agreement reached.

The workers said they would resist any attempt by those in authority to deny them of a new minimum wage. They warned that “Nigerian workers are not slaves.”

Speaking in Lokoja through Onuh Edoka, the Kogi State Chairman, they (workers) demanded for the immediate implementation of the new minimum wage.

“Enough is enough,” he said.

He warned the government against testing the will of the workers, describing N20, 000 minimum wage is inadequate to offset children’s school fees, medical bills, and take the workers home.

The unionist also rejected the NGF position that its members cannot pay the new minimum wage, describing their N20, 000 offer as “peanuts, wickedness and inhuman.”

According to him, the new minimum wage was feasible, if those in authority would cut down on frivolities, prioritise expenditure; with governors cutting down on their jamboree, wardrobe allowance and humongous amount spent on the state assemblies to impeach their deputy and speakers.

The Jigawa State chapter of the NLC warned the governors to avoid any acts that will throw the common man into more difficulties through refusal to implement the N30, 000 minimum wage.

In a speech at the Government House in Dutse,  by the state NLC chair, Usman Yau,  noted that Jigawa State Governor Muhammad Badaru Abubakar had showed willingness to approve and implement whatever amount agreed to by the Federal government and the workers’ unions.

He urged the governor to speak to some of his colleagues who are not willing to comply on the approval of the National Minimum wage.

The governor reassured his administration’s readiness to implement whatever amount okayed by the NGF, expressing the hope that an agreement will be reached before November 6.

In Ado-Ekiti, Governor Kayode Fayemi described the demand for a new minimum as legitimate and worthy of being given consideration.

He spoke while receiving union officials, who led their members on an awareness rally to the Government House.

The rally, which kicked off at the Mobil Filling Station in Ajilosun area of the state capital, terminated at the Governor’s Office where they tabled the workers tabled their request before the governor.

The workers had earlier addressed the public at the Erekesan Market and urged them not to be misinformed by media hype from some quarters on the planned strike by all labour unions in the land.

Represented by his Chief of Staff Biodun Omoleye, the governor said his government would do everything to support the demand since it was a product of law and constitution.

He said: “My government, as you all know, is labour-friendly. The agitations for new national minimum is legitimate and let me tell you, my government will never allow workers to go hungry again by working without getting their pay.

“The present wages you are taking can no longer take you half home, as a responsible government; we must listen to your voices. We will take your demands to the Governors’ Forum and we will put up a voice for you there.

“Here in Ekiti, we will not only pay your salaries and pensions as and at when due, we will also engage in capacity building to motivate workers.

“We sympathise with you on the backlog of salary arrears. As we are settling down, our government will look into it, because never again shall Ekiti workers go hungry due to non-payment of salaries, bye, bye to such era.”

The union leaders deplored the alleged insensitivity of the Federal Government to have turned down the N30, 000 proposal, when it can pay the jumbo pay being taken by politicians.

Adelegan said the national minimum wage ought to have been reviewed since 2015 based on the proposition that the law should be reviewed every five years, in accordance to the law.

He said: “Go and check the records, Nigerian workers are the least paid in Africa and globally. South Africa, Ghana and other smaller countries are paying better wages.

“In a country where government can’t pay just N30,000 minimum wage, its senators remain the highest paid in the world, this in insensitive.

“So, if the government refuses to sign into law before November 11, 2018, we will not hesitate to grind every sector of this country.”

The NLC and TUC leaders in Ogun State, led their members and members of other affiliate unions to march through major roads in Abeokuta, sensitising residents ahead of the planned nationwide strike over minimum wage.

The rally, which commenced from the state NLC secretariat, passed through Pansheke, Omida, Ibara and other major roads in Abeokuta.

NLC Chairman in the state, Akeem Ambali, who addressed reporters, berated those calling for salary deregulation, arguing that it is baseless, since the salaries of National Assembly members and that of the governors were not deregulated.

According to Ambali, “it is inhuman and hypocritical for some people who earn between N16 million and N23 million per month to lead the campaign against the payment of N30, 000 minimum wage to workers.

“If the people, in this same Nigeria and under same market, take as much as cumulative total of N23 million and N16 million per month, for God sake, and you are say you can’t afford N30, 000…”

The TUC state chapter chairman, Olubunmi Fajobi, noted that workers were the least paid in the world, adding that the country also ranked among the poorest.

According to him, the negotiation with government had been concluded, and could not understand why the same government was foot drafting with implementation.

“We have the government deliberately deceiving the entire Nigerians. That’s why as organised labour we considered it necessary to sensitise every Nigerian to know what is particularly at stake,” Ambali said.

The President of the National Association of Nigerian Nurses & Midwives and the National Chairman of the Joint Public Negotiating Council, Abdulrafiu Adeniji, who were in the state to monitor the rally, said workers have been suffering. They demanded an end to it.

He noted that the sensitisation was necessary to equip Nigerians to stand for their right.

Ambali said: “I have been instructed to here to monitor the rally to sensitise and mobilise not only the work force but the Nigeria populace about the implication continuous denial of the workforce of the expected minimum wage.

“So, we are here as a mark of solidarity for suffering working class and to establish the fact that long enough the government of this country has deprived not only the workers but the entire populace their right.

“If this is so, we need to sensitise our members and the entire world to know their right, stand for it and fight for the right of Nigerian workers. We must tell the government why the new minimum wage must not only be paid but be expedited upon.”

Oladapo IyareAuthor
Sorry! The Author has not filled his profile.
Related tags : necaNLCTUCULC