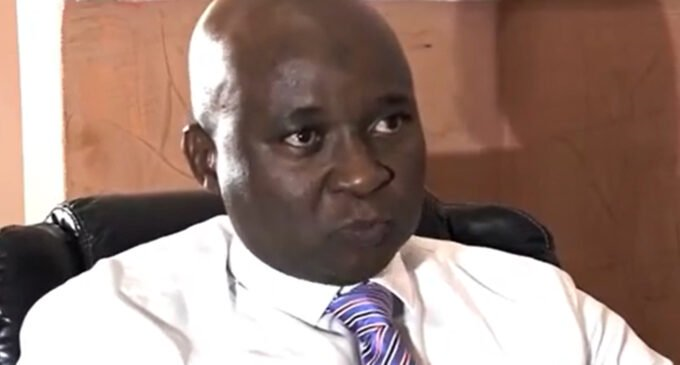 A former bank chief serving as witness against Mohammed Bello Adoke stunned a federal high court in Abuja on Monday when he said the transaction by the former attorney-general of the federation was “transparent and legitimate”.

Adoke and Aliyu Abubakar, a businessman, were re-arraigned by the  EFCC on August 4, on an amended 14-count charge bordering on money laundering.

The former AGF is answering to seven counts, same as Abubakar.

The anti-graft commission said the offence is contrary to the combined effect of section 16 (1) (d) and of section 1(a) of the money laundering prohibition act of 2011 (as amended) and punishable under section 16 (2)(b) of the same act.

However, Rislanudeen Mohammed (pictured), former acting managing director of Unity Bank Plc, who is serving as the EFCC star witness, has said it was not a case of money laundering.

During cross-examination by Kanu Agabi, counsel to Adoke, on August 13, Mohammad had said the $2, 267,400 million paid to him by Adoke in September 2013 was not a procced of money laundering but meant to refund a N300 million loan he (Adoke) collected from Unity bank in 2012.

‘MONEY WAS TO OFFSET ADOKE’S LOAN’

Still under cross-examination from Agabi at the resumed trial on Monday, Mohammad said after collecting the money, he took it to the bank and handed it to Nura Abdulahi, the branch manager.

He said he then called one Usman Bello, a bureau de change operator (BDC), to whom the cash was handed to.

When Agabi asked him if there are available records of the transaction from the moment he collected the money from Adoke, the witness answered in the negative.

He said although he collected the money from Adoke in his official capacity as an agent of the bank, he did not issue a receipt to him.

He also said the bank did not record the $2.2 million transaction because Adoke did not have a domiciliary account with Unity Bank.

He said this was why he had to call Bello to change the money to naira and pay it into Adoke’s account to offset the loan.

Adoke had said he had taken a mortgage of N300 million from the Unity Bank to buy a property from Abubakar.

But having failed to make his own equity contribution of N200 million to take possession of the property, Adoke said the money was refunded to the bank.

‘YES, IT WAS TRANSPARENT’

When asked if he reported the transaction to the EFCC, ICPC, police or any other institution against crime, Mohammad said he did not report because there was nothing suspicious about the transaction and that he was not reprimanded by the bank.

The witness added that there was nothing to hide because “the bank was aware that my wife and daughter were shareholders in that BDC because it was registered with the cooperate affairs commission”.

When asked if it was ethical that to take monies he had deposited to the bank and hand it over to the BDC owned by his wife and daughter, Mohammad said “there is nothing wrong”.

“That proves that everything about the transaction was transparent and legitimate?” Agabi asked

Mohammad said: “Yes, it was transparent.”

Giving his examination in chief, Bello, the bureau de change operator, said Mohammad had called him to come to Abuja to collect some money.

“I went with Rislanudeen (Mohammad) to Adoke’s house but I didn’t see Adoke because I stayed outside,” he said.

“We went to the bank after that and Rislanudeen gave me the $2,267,400 and asked me to change it to naira and thereafter pay it into Adoke’s account, which I did.”

He said he took the cash to Kano where he changed it.

After changing the dollars, Bello said it amounted to N367,318,800 which he transferred to Adoke’s account in 35 tranches due to the bank’s policy which prohibits payment exceeding N5 million at a time.

The EFCC through its counsel, Bala Sanga, also called the fourth prosecution witness.

However, shortly after the witness affirmed to tell the truth, Olalekan Ojo, counsel to the second defendant (Abubakar), raised an objection.

Ojo noted that the statement of the witness was not attached to the proof of evidence served on the defendants by the prosecution as stipulated in Section 376 (4) of the administration of criminal justice act (ACJA).

Responding, Sanga said it was an error and apologised to the court.

Ruling on the issue, Inyang Ekwo, the judge, noted that this was the second time the prosecution had failed in that area.

He adjourned the matter to Wednesday, September 9, to enable the EFCC serve the witness statement on the defendants.