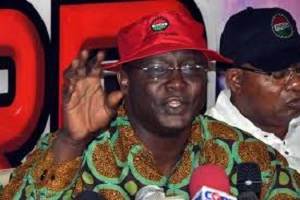 Some members of the organized labour unions have arrived at the office of the Secretary to the Government of the Federation in Abuja, for a meeting to finalize negotiations over the new minimum wage.

The president of the Nigeria Labour Congress, his general secretary and some representatives of the Trade Union Congress, as well as the chairman of the National Income and Wages Commission, were seen arriving the premises.

Also present is the Governor of Kebbi State, who is one of the governors’ representatives in the tripartite committee and the Minister of Labour, Chris Ngige.

Some of those arriving at the office of the SGF

The meeting comes barely 24 hours after the labour leaders boycotted a meeting convened by the Federal Government.

It is expected to be a closed-door meeting, after which the media will be briefed on the outcome.

The labour leaders who are seeking an upward review of the current minimum wage from N18,000 to N30,000 had earlier threatened to commence a nationwide strike on November 6 if the government failed to meet their demands today.

Oladapo IyareAuthor
Sorry! The Author has not filled his profile.
Related tags : NLCTUC