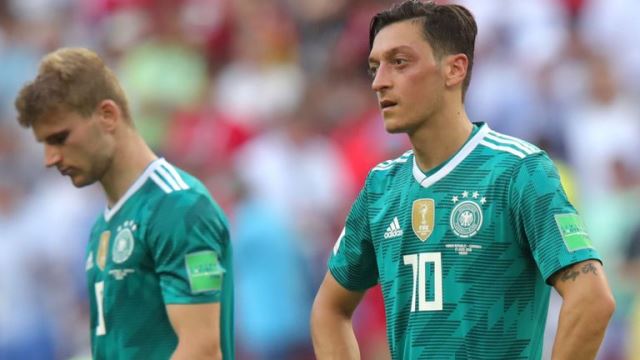 Germany became the third straight reigning champion to be knocked out in the group stage at the next World Cup, following Italy and Spain, after it was beaten 2-0 by South Korea in Group F.

In an embarrassingly poor performance Germany went behind in the game’s closing stages when Kim Young-Gwon scored following a VAR review with Son Heung-min then breaking away, German keeper Manuel Neuer was by then in the South Korean half, to add a second.

That result in Kazan, coupled with Sweden’s 3-0 win over Mexico in the other group match in Ekaterinburg, meant the Swedes and Mexico progressed to the round of 16. Sweden and Mexico finished on six points, with Sweden finishing first on goal difference.

There was joy for South Korea at the World Cup but dejection for holders Germany.

It was only the second time in Germany’s storied World Cup history that it had failed to progress from the first round and the last occurrence came in 1938.

Germany’s last-gasp 2-1 win over Sweden in its previous match was considered by many, understandably, to be the type of result that would get them going after a 1-0 loss to Mexico, but it ended up meaning little.

Germany coach Joachim Löw made five changes to the starting lineup from that win but nothing worked. Striker Timo Werner who set the Bundesliga alight last season, failed to make an impact although one could argue he was playing out of position on the wing.

Holding midfielder Sami Khedira, dropped after the Mexico result, was reinserted while perennial World Cup scorer Thomas Muller began on the bench. Leon Goretzka, known for his play in the center of midfield, also occupied a position on the wing.

In the first half leading German football writer Raphael Honigstein tweeted “meh” of Germany’s performance but things were about to get much, much worse for the World Cup holders.

Questions also be asked of Löw, the man who had guided Germany to five major semifinals, not least his decision to leave Manchester City winger Leroy Sane out of his squad.

For South Korea, there was jubilation in collecting a first World Cup win over Germany in three attempts. South Korea didn’t qualify mathematically they still had a chance even in losing their first two games but will never forget what happened in Kazan.

A draw would have brought enough joy but with Germany pressing for the goal that would have seen them go through, plenty of space was left on the counter attack.

After Germany defender Mats Hummels fluffed a free header in the 87th minute, the ball going off his shoulder, Kim netted in the third minute of added time from a corner. VAR confirmed there was nothing wrong with Kim’s precise finish after the linesperson initially flagged for offside.

South Korea made it 2-0 three minutes later when, with Neuer in the opposition half, Son sprinted from his own half to latch on a hoofed ball and put the ball into an open goal.

The jubilation continued for South Korea while Germany’s misery was complete.