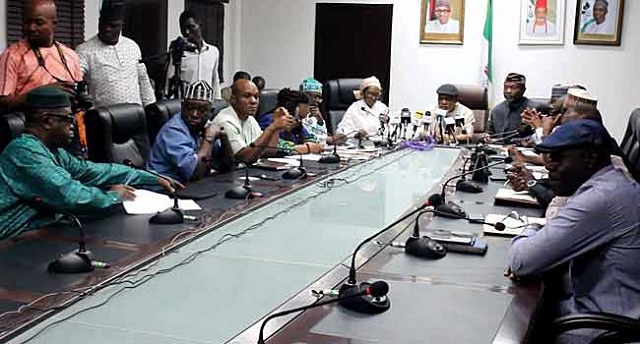 The Federal Government has held a meeting with leaders of the Nigeria Labour Congress (NLC) over a new minimum wage for workers in the country,

However, the meeting which took place on Friday in Abuja ended inconclusively as both parties agreed to continue their discussions on Monday next week.

The government convened the meeting in a bid to avert the proposed rally by the workers who have demanded a minimum wage of N30,000.

Members of the organised labour had planned to stage the protest against the alleged complacency on the part of the government in the processes that would lead to the implementation of the new minimum wage demanded.

The National President of NLC, Mr Ayuba Wabba, told reporters at the end of the meeting which lasted for hours that the outcome of the discussion next week would determine the next step they would take.

He said, “We have not been able to conclude and we have agreed to reconvene on Monday, to be able to tidy up the process.”

“The issue is about making sure that the (National Minimum Wage) Bill is transmitted and other auxiliary issues that the government said it is trying to put together. We also want to see how the money gets into the pockets of our workers.”

On his part, the labour and employment minister insisted that the government was keenly interested in transmitting the new minimum wage recommendations to the National Assembly.

He also clarified the functions of the new committee that was set up by President Muhammadu Buhari to look into the recommendations of the tripartite committee.

“If the President is not committed to it, he won’t put up the National Minimum Wage Committee in the first instance. He did so, inaugurated it, and provided it with the equipment to work,” Ngige said.