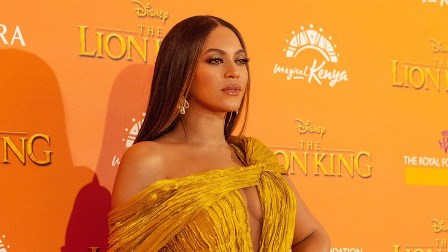 Beyonce made her Disney debut when starring as Nala in The Lion King live action remake.

And it appears she’s itching for more, as it’s rumoured the 37-year-old is in talks with the company to work on another film.

Following the success of the classic animated reboot, a source told The Sun newspaper’s Bizarre column that we could end up seeing more of the Single Ladies hitmaker on the big screen.

They claimed: ‘Beyonce’s deal with Disney for The Lion King was one of the biggest it has done to date.

‘Now they want to expand it by giving her free reign to create her own movies under the Disney umbrella.’

The insider added: ‘The conversations are ongoing but it’s an exciting proposition.’

Queen Bey starred in the movie alongside the likes of Donald Glover who was cast as the main protagonist Simba.

As well as lending her voice to the iconic role, the mother-of-three put out an incredible soundtrack that she said was a ‘love letter to Africa’.

This features a host of Afrobeat artists from Nigeria and Ghana, such as Burna Boy, WizKid, Shatta Wale, Tekno, Yemi Alade and Mr Eazi, as well as South African artists Busiswa and Moonchild Sanelly.

And it is also a family affair with both Beyonce’s hubby Jay-Z and their seven-year-old daughter Blue Ivy appearing on a number of tracks.

However, despite her best efforts, the singer was criticised for appearing to snub Kenyan artists on her new album, even though the Disney movie took inspiration from the country’s culture.

John Katana, frontman of the Chakacha Kenyan band, Them Mushrooms, helped create Hakuna Matata, which featured in both the original 1994 Lion King movie and the latest remake.

Explaining his disappointment, John told TMZ: ‘No one called us, we just read about it in the media, just like everyone else. There’s been a big debate on social media about that, Kenya missing out on The Lion King.’

He added: ‘When the creatives in the country are complaining that Kenyan acts, even The Mushrooms, should have been on Beyonce’s recording because the phrase was made popular by Kenya, from our band.

Daniel Daniel AnomieteiEditor
Sorry! The Author has not filled his profile.
×